Baccarat is referred to as Punto Banco outside North America. It is the game of choice in Asian casinos and in high limit areas. Baccarat is generally dealt with eight decks. There are many superstitions attributed to baccarat. In reality, the game is pure luck. There is no skill involved at all. The house will even let players count cards at the table in an attempt to determine streaks.

How to Play Baccarat

The rules of the game are very simple. A player may bet on the player, banker, and the tie. Players may wager on any and all bets or sit out a hand if they are not feeling lucky.

The game starts with players receiving two cards. The point value is related to the amount shown on the card for the 2’s through 9’s. Aces count as one. Tens, jacks, queens and kings count as zero.

The highest hand score is nine. If any combination of cards is higher than nine then the score is related only to the last number of the combined value. For example, a nine and a five equals 14 in blackjack, but in baccarat it would only be equal to four.

If the player or dealer has an 8 or a 9, the hand is instantly over and all bets are resolved. If the player hand has a 5 or lower, it automatically receives a card.

The banker’s hand is a bit more complicated. The banker hits five or less if the player stayed. Otherwise, the banks action depends on the card drawn by the player.

The hand closest to a total of nine points wins. Players are paid even money on a player bet. A banker bet has a 5% commission on winning wagers. A tie pays 9-1. Dealer and banker bets push on a tie. 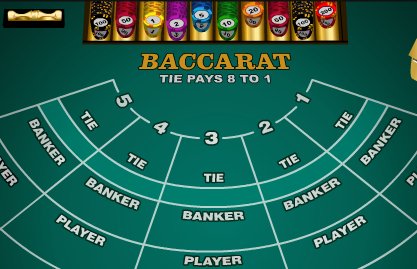 Baccarat is played at three different types of tables in casinos. The most common is mini baccarat. This is where a dealer runs the game and players simply choose where to wager. Midi Baccarat is basically the same with a larger table. Midi Baccarat is generally found in high limit areas.

Online baccarat is dealt similar to Mini Baccarat. The only difference is that the deck is reshuffled after every hand.

One interesting scandal that has come out of the baccarat scene is recent years is edge sorting. The story that hit the news across the world was professional poker player Phil Ivey being accused of edge sorting in London by Crockfords and the Borgata in Atlantic City.

Edge sorting is when a player recognizes the cards by identifying the backs based on patterns that were not printed properly. In the case of Phil Ivey, he was accused of having dealers sort cards that were important a different direction than irrelevant cards. In this case, the 6’s, 7’s, 8’s, and 9’s were reversed in the shoe.

There are lawsuits pending in London and New Jersey involving Phil Ivey and alleged edge sorting. In London, Crockfords refused to pay him after accusing him of edge sorting.

Borgata sued Ivey after losing to him in four separate sessions in 2012. Borgata waited until 2014 to file the lawsuit. In court documents, Borgata accuses Ivey of attempting to lose money back to the casino to try and cover his tracks.